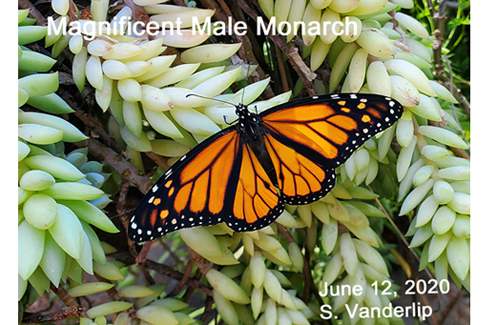 Much has happened with our Western Monarch population this year that is critical for every monarch lover to know about.

Every Thanksgiving, a count of overwintering monarchs in multiple overwintering sites along the California central coast is taken. It has provided a benchmark for how well the western monarchs are doing. This past Thanksgiving, Nov 2020, had the unfortunate result of less than 2,000 monarchs observed overwintering in the normal roosting (overwintering) sites that have been used by monarchs for thousands of years.

To put it in perspective, in the 1980’s somewhere between 2.4 and 4 million monarchs were counted. Four years ago, only 150,000.  Last year only 30,000 monarchs were counted. This year, down to less than 2,000 monarchs overwintering. Keep in mind that it is the overwintering monarchs that wake up in late February and populate the 7 states in the western monarch range. This past year, Washington and Oregon, though they have planted some excellent native habitat for monarchs, saw only a handful of monarchs all year. On the other hand, southern California saw and unusually high abundance of monarchs from April thru July. Then the population declined, with what I believe is why discussed below. 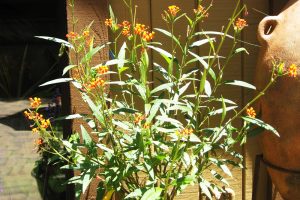 As many of you already know, with the introduction of tropical milkweed over the last ten years, monarchs can be found in small numbers in southern California year-round. It is an imperative, however, that everyone prune tropical milkweed by mid-October to promote migration and kill off the O.e. parasite that definitely accumulates due to tropical milkweed. Tropical milkweed remains readily available at Home Depot, Lowes, Armstrong Gardens, and other nurseries throughout southern California and does increase the population’s O.e. parasite prevalence and deters migration behavior, both of deep concern to many monarch researchers and NGO’s including Xerces and Monarch Joint Venture.

This year, April thru December 2020, observation of monarchs varied throughout the months.  As already mentioned, April thru July saw a profusion of breeding monarchs in Orange County, California, more than in many a year as reported by numerous local monarch butterfly gardeners.

(Tropical milkweed with orange, yellow and orange or all yellow flowers)

Watch a fun and engaging video from April thru July, 2020 of monarch caterpillars ravenously eating native and tropical milkweed in my habitats: 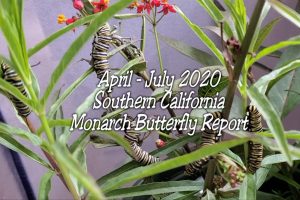 Southern California experienced a “heat dome” in August where temperatures reached up to 112 degrees for three days in a row after which there was a significant reduction in monarchs in gardens in Orange County. Some home gardeners were reporting no monarchs in their gardens at all after the heat bomb and then the California fires.

During end of season October thru November, some sightings were reported. The Thanksgiving count came in and raised great concern. The question was asked, How much of the overwintering population comes from southern California monarchs? After speaking with several key researchers, that answer is unknown. Dr. Francis Villablanca who manages tagging of western monarchs said that only one monarch tagged from southern California has ever been found at central coast overwintering sites. However, he also said only 1% of all tagged monarchs are ever found and recorded.

There is one study from UC Davis in 2015 that looked at this question and concluded that southern California monarchs may contribute up to 30%: Monarchs’ Wings Yield Clues to Their Birthplaces | UC Davis: Of the 114 overwintering butterflies sampled, they found that 30 percent developed in California’s southern coastal range, 12 percent in the northern coast and inland range, 16 percent in the central range, and 40 percent in the northern inland range… Across all four overwintering sites, they found butterflies from a wide range of locations, although most were from the southern coast of California and the more distant northern inland U.S.” By Kathy Keatley Garvey on January 26, 2016 in Environment)

In December, multiple monarch gardeners in Orange County, San Bernardino County and San Diego County reported having a few monarchs visiting their gardens, laying eggs and larvae eating on tropical milkweed. Southern California does have resident monarch butterflies that do not migrate and remain through our mild winter months especially since tropical milkweed abounds in southern California and will leaf out year round to support eggs and larvae.

Some hopeful insights came from San Diego County on Dec 6, 2020 when Rob Woods reported, “Hundreds, if not thousands of eggs and caterpillars are being reported by our local monarch butterfly gardeners.” He went on to say, “I believe that this is evidence that while the western migration might be close to a total collapse, there is still a healthy sedentary population here in San Diego County, and perhaps elsewhere.” Encouraging news.

NOTE: With input from Monarch Joint Venture, Dr. Francis Villablanca, and Xerces, it appears that there is some question as to whether resident monarchs is good or bad. It may contribute to the demise of the western migration. It may mean the survival of monarchs in southern California. It may mean a reliance on tropical milkweed for a resident population to exist and an increase in the O.e. No clear answers are known. Also unknown to researchers is where southern California monarchs come from in the spring and where they go in the fall. Questions that remain that make it difficult to know exactly how to save the western monarchs. Regardless, home gardeners are highly encouraged by all researchers to plant native milkweed and native nectar plants.

There are several Regional Conservation Districts (RCD) in southern California working to protect pollinators and restore habitat, engage, and educate the public, and provide native milkweed seeds and seedlings. 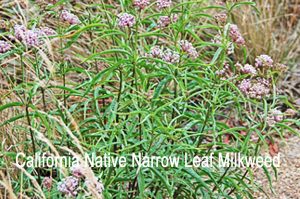 One such highly active RCD is the RCD San Diego that is the founding member of the San Diego Pollinator Alliance (SDPA), “a group of organizations and agencies working together to protect pollinators in San Diego County. Other members include Butterfly Farms, Sky Mountain Permaculture, the California Native Plant Society – San Diego Chapter, US Fish & Wildlife Partners for Fish & Wildlife Program, the Natural Resources Conservation Service, and the San Diego Natural History Museum.  The SDPA aims to increase native pollinator habitat and awareness about pollinator-friendly practices throughout San Diego County through outreach, education, and on-the-ground programs.”

As stated on the RCD San Diego website:
The San Diego Pollinator Alliance has developed a series of native demonstration pollinator gardens across the county to give residents ideas on how to create pollinator habitat at home. Demonstration pollinator habitats have been planted a Sike’s Adobe within the San Dieguito River Park and the Los Jilgueros Preserve in Fallbrook, as well as at Lafayette Elementary and Scripps Ranch High School. We will soon be helping to install a pollinator garden at Chula Vista High School and within an HOA in San Marcos.

The SDPA hosts a thriving demonstration pollinator habitat at the San Diego County Fair called the Pollinator Pathway.  Built in 2015, it is now a permanent feature within the Fair’s Infield Farm.

Other pollinator gardens around San Diego County include:

Additional information about Regional Conservation Districts in southern California can be found at https://carcd.org/rcds/socal-inland/ . The following RCD may have programs for pollinator habitat restoration:

NATIVE MILKWEED SOURCES in Southern California
the SDPA is working to establish a San Diego seed source of native milkweed that can be used in pollinator habitat projects of all scales – from the home garden to restoration projects. Visit the Resource Conservation District of San Diego website for more information on plants available for purchase by San Diego residents.

Also on the site are a host of Pollinator Health Resources, Native plant resources, where to buy native milkweed and nectar plants in the San Diego area, and how to plant.